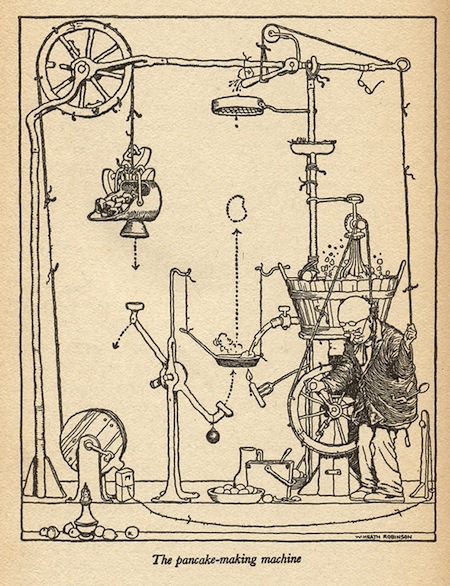 1 May 1943: GC&CS activated the Heath Robinson Machine (predecessor to Colossus). It had a frame onto which two teleprinter paper tapes were mounted -- weaving their way through a convoluted network of reels -- and read optically; a rack containing counters, and another rack for valved logic circuits. The machine was an effective prototype, and paved the way for creation of the Colossus, which swapped the tape used in the Heath Robinson machine for an electronic system.

The machine was named after Heath Robinson - a British cartoonist and illustrator best known for designing fantastically complicated machines. To describe something as Heath Robinson-esque is to describe an invention that is simultaneously ingenious, extremely complicated, and makeshift. One of Robinson's illustrations is featured here - the pancake-making machine!

Learn more via the WIRED article by Olivia Solon linked below.