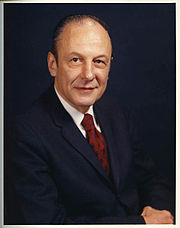 21 April 1974: Dr. Louis Tordella retired as Deputy Director of NSA. He was the longest-serving deputy director at NSA. Dr. Tordella was inducted into the NSA/CSS Cryptologic Hall of Honor in 2000. Learn more via the links below.

Dr. Louis W. Tordella, a mathematician who helped break the German military code in World War II, and later spent 16 years as the deputy director of the National Security Agency. His career at NSA brought him to the very front rank of cryptologists. He was an early advocate of the use of computers for cryptologic work, and helped to cement a close working relationship with American industry. He helped to create and shape the NSA and was regarded both as a pioneer in the development of ever more powerful and sophisticated computers to break enemy codes and as a master administrator who pressed for establishing a combined military code-breaking operation and then virtually ran it under a series of military directors.

Dr. Tordella passed away at the age of 84 in 1996, read the NY Times obituary via the link below.