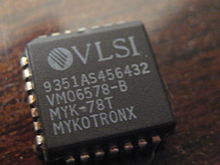 From Wikipedia: The Clipper Chip was a chipset that was developed as an encryption device that secured “voice and data messages," with a built-in backdoor. It was intended to be adopted by telecommunications companies for voice transmission. It could not only encode messages but decode them as well. It was part of a Clinton Administration program to “allow Federal, State, and local law enforcement officials the ability to decode intercepted voice and data transmissions." Each clipper chip had] a unique serial number and a secret ‘unit key,’ programmed into the chip when manufactured."[2] This way, each device was meant to be different from the next. It was announced in 1993 and by 1996 was entirely defunct.