Payne Harrison - Creator of the Crypto-Thriller 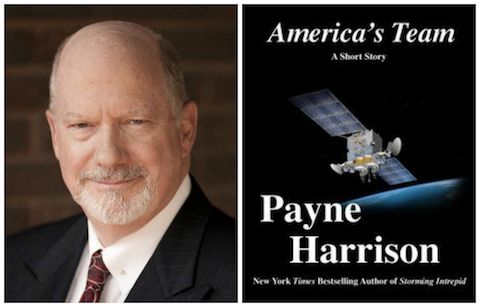 Payne Harrison is a New York Times bestselling author who has taken his readers for a ride on a hijacked space shuttle in Storming Intrepid, and down to Antarctica for a Russian-American shoot ‘em up in Thunder of Erebus.

However, he is also notable in that he crafted what can best be called the first “crypto-thriller” – i.e., setting a page-turner novel within the signals intelligence community.

“As a novelist you’re always looking to push the envelope,” recounted Harrison. “And as a former Army signal officer I gravitated to the SIGINT world. When I peeled the onion in the crypto community I found a rich fabric that was largely untouched by other novelists, so I jumped in with Black Cipher – the story of the chief cryptanalyst of Government Communications Headquarters in Britain who breaks an impregnable cipher. This watershed event thrusts him into a race to uncover a conspiracy within Her Majesty’s Government, before his time – and his luck – run out.”

An interesting sidenote - Harrison shared that Mr. Lambros Callimahos, a noted NSA cryptanalyst and teacher, influenced the creation of the main character in Black Cipher, Faisal Shaikh, who is chief cryptanalyst of GCHQ.

As to why the SIGINT landscape remains largely untouched by other novelists, Harrison said, “The underlying fabric of the SIGINT world gets very technical very fast, and I think most writers are turned off by that. It’s easier to write about explosions. However, having also been a newspaper reporter I think that’s where I have a particular skill – synthesizing something technically complex into prose that can be entertaining.”

Harrison hopes other novelists and screenwriters will discover the SIGINT world. “The Imitation Game about Bletchley Park was a stellar film in my opinion, despite its historical inaccuracies. You can walk through the National Cryptologic Museum and discover a wealth of material that would be pure gems to any storyteller – like the Venona decrypts, or the HYPO station in Hawaii before the Battle of Midway.”

And what about his new short story, America’s Team, set in the National Security Operations Center?

“First and foremost I wanted to return to the SIGINT world for a thriller of a story; but beyond that I felt in recent times the NSA had taken an enormous amount of unjustified criticism. Yet because of the nature of their mission they had to remain silent and couldn’t defend themselves. I hope in a small measure America’s Team shows the sense of purpose the people of the NSA bring to the table every day to keep our nation safe -- in a dangerous world of asymmetric threats.”

Of course Harrison has more new and exciting material on the way, but we were sworn to secrecy! So stay tuned to his website payneharrison.com for news, and you can also follow him on Twitter @PayneHarrison.

In the meantime, if you haven’t already checked it out - America’s Team is an e-book on Amazon Kindle, and the trailer for the story can viewed on Payne Harrison’s YouTube channel.