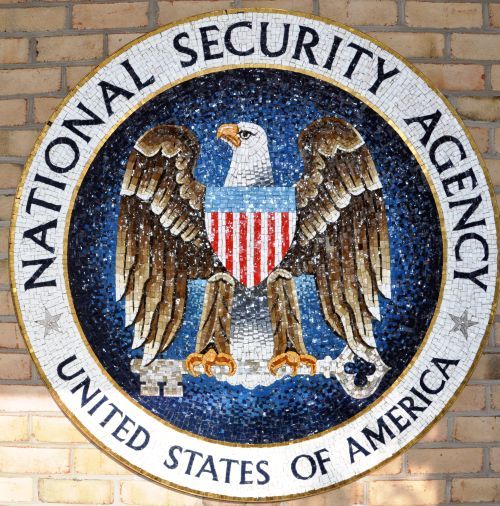 In 1968, NSA Graphics created a large mosaic of the NSA seal for display in the Headquarters lobby. Forty-five years later, when the lobby was renovated, the mosaic came down. The National Cryptologic Museum claimed the seal and cleaned the nooks and crannies of the 20,000+ glass tiles. It now hangs in the museum’s front entrance - the first exhibit visitors see.

History of the Insignia

When NSA was established in 1952 it had no emblem; the new organization simply used the Department of Defense emblem. William F. Friedman, the father of modern American cryptology, suggested to the Director, LTG Ralph Canine, in 1955 that there be a design competition for an NSA emblem, but the idea was not accepted. 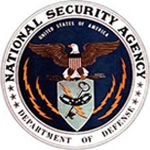 NSA adopted its own emblem, the first of two, in 1963. There is no information available as to the origin or design of that first emblem; its earliest noted use was on the cover of the February 1963 Newsletter.The second emblem, the one still in use today, first appeared in September 1966.

The second emblem was designed under the instructions of LTG Marshall Carter, who became Director in June 1963. As the designer, Richard Nachman of the Agency's graphic design branch, recalls it, he was summoned one day in 1965 to the Director's office and asked to design a new emblem -- "something unique" was his only guidance. After researching heraldry at the Library of Congress, he prepared the new emblem; LTG Carter approved it on the spot. There was no special announcement or ceremony for the new emblem.

The most interesting feature of the new emblem was the substitution of the words "United States of America" for "Department of Defense." This was done because LTG Carter believed NSA should emphasize its national mission and should de-emphasize its mission and position within the Department of Defense. NSA has retained the "Carter emblem" ever since.

The NSA flag carries a representation of the emblem and was designed about a year later. It was designed arbitrarily by Mr. Nachman when the Director requested a flag. Apparently, no effort was made to imbue the flag with any special symbolism.

According to Mr. Nachman, the final choice of colors for the NSA emblem was made for aesthetic reasons rather than symbolic ones -- the particular combination and shades of red, white, and blue looked good together. However, these colors do carry heraldric meaning: white represents purity, blue stands for vigilance, perseverance, and justice, while red denotes valor.