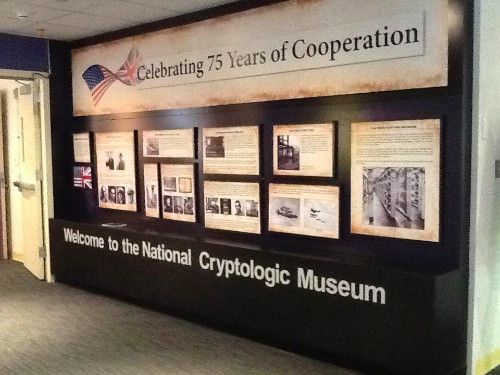 The National Cryptologic Museum has a new exhibit!

75 years ago the first U.S. cryptologists were permitted to visit their British counterparts at Bletchley Park. The cryptanalysts in Britain had recently built a cryptanalytic Bombe to find the daily keys for the German cipher machine Enigma. The Americans were shown this large machine and, after returning to the U.S., were able to build their own machine, improving on the design. In return, the Americans shared their analog for the Japanese diplomatic cipher known as Purple.

On February 8, 2016, this collaboration was commemorated and celebrated with an evening event at the museum between the National Security Agency and their British partner. 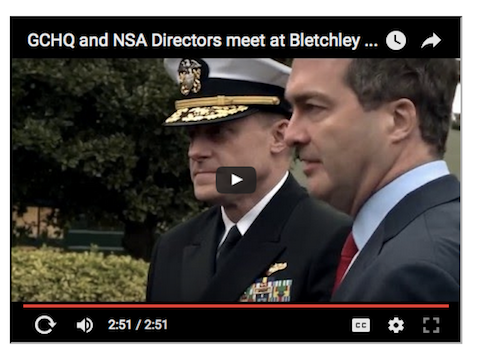 Please click to view a three-minute video clip of this historic visit.

In early 2016, the Directors of the US and UK’s signals intelligence services met at Bletchley Park to mark the 75th anniversary of the meeting which began the Special Relationship, in the very room where it took place.

Admiral Michael S Rogers, Director of the NSA, joined GCHQ Director Robert Hannigan to tell the story of how a late night sharing of secrets over sherry began the Special Relationship which remains crucial to both nations today.

On 8 February 1941, months before entering the war, four US signals intelligence officials were delayed, diverted and even shot at as they travelled to the Buckinghamshire countryside.....READ MORE

During the celebrations, Bletchley Park also received a visit from NSA Historian, Dr. David A Hatch, and GCHQ Historian, Tony Comer. They discussed the importance of the UK-USA Special Relationship.

Dr. Hatch said, "It was unprecedented. Two countries opening up and sharing secrets with each other. That meeting was the seed for this relationship which has helped keep both sides safe. It had a profound effect on the war and on the peace afterwards."

The celebratory event is also covered, and the color photographs reproduced along with a copy of a post-war congratulatory letter from General Eisenhower to MI-6 Chief Stewart Menzies [1939-52], in Issue #6 of the Bletchley Park Magazine, a copy of which can be viewed at the NCM library.