In 2010, the Acquisition Committee (AC) won five Union Army transcripts of Confederate war-date signal flag messages in a rare documents auction conducted by Raynor’s Auction House of North Carolina. The total cost of the transcripts was $1,077. The AC found a sponsor to cover the cost of this auction win, plus two lots of Civil War letters acquired in a December 2009 auction. The total sponsorship was for $7,500.

For background: The signal messages were intercepted by the Union Army Signal Corp at Kennesaw Mountain, Georgia between 14 and 17 June during General Sherman’s Atlanta Campaign. Unaware that the Union Army had broken their signal flag code (i.e., the Wig-wag code), the Confederates continued to send sensitive military messages on Union troop movements during the siege of Kennesaw Mountain. The intercepted messages were partly printed on “Signal Corps U.S.A.” forms and show the Confederates rising concern about being surrounded and outflanked by the Union army. These messages provide a firm link to our signals intelligence (SIGINT) intercept history that predates the generally accepted era of SIGINT that began with the introduction of radio and field phones in WW I. Two pictures of the transcripts are included here. Originally posted 9/8/2010 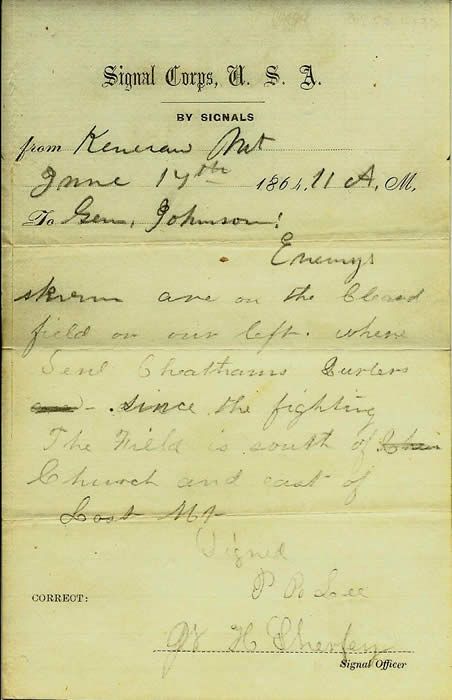