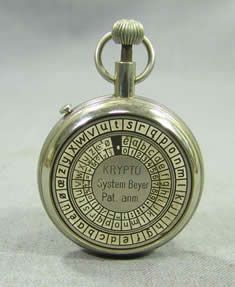 A Beyer pocket cryptologic device from the 1930s, which in size and appearance resembles a pocket watch of the era, has been donated to NCMF by Mr. Michael Graham of California along with photocopies of the original ten-page US Patent dated 25 January 1932. Only about a half-dozen examples of the Beyer device are known to exist.

An extract from 'Denmark Abroad', circa 1933, describes the KRYPTO System Beyer device.

"The device is manufactured and sold by the A/S The Danish Cipher Machine Co. Ltd., Copenhagen, the leader of which was the well-known Danish pilot Captain A.P. Botved. The system is based upon the theoretical calculations of the late A. Køhle, a Danish engineer. One of the officials of the Danish State Railways, P.G.G. Beyer succeeded in putting Køhle's theories into practical use. In conjunction with Captain Botved , the Danish Army Technical Corps and the Royal Engineers, the mechanical part of the device was resolved and designed.

The Beyer device consists of two disks, or rings carrying two dials divided into 26 or 30 slots in which the alphabet is written. - either in alphabetical order or in any other order that is chosen. An inner dial carries 26 or 30 additional slots bearing figures and punctuation marks. The disks are moved in relation to each other by means of two springs, rotation being set in motion by depressing a release spring. The movement is stopped by means of two wheels revolving on pivots or cam wheels arranged with intermediate spaces of unequal size which are numbered. The apparatus is always ready for use with the various springs being rewound automatically. The possibility of decoding messages encrypted on the Krypto device are extremely small since there are 7034 x 1061 combinations."