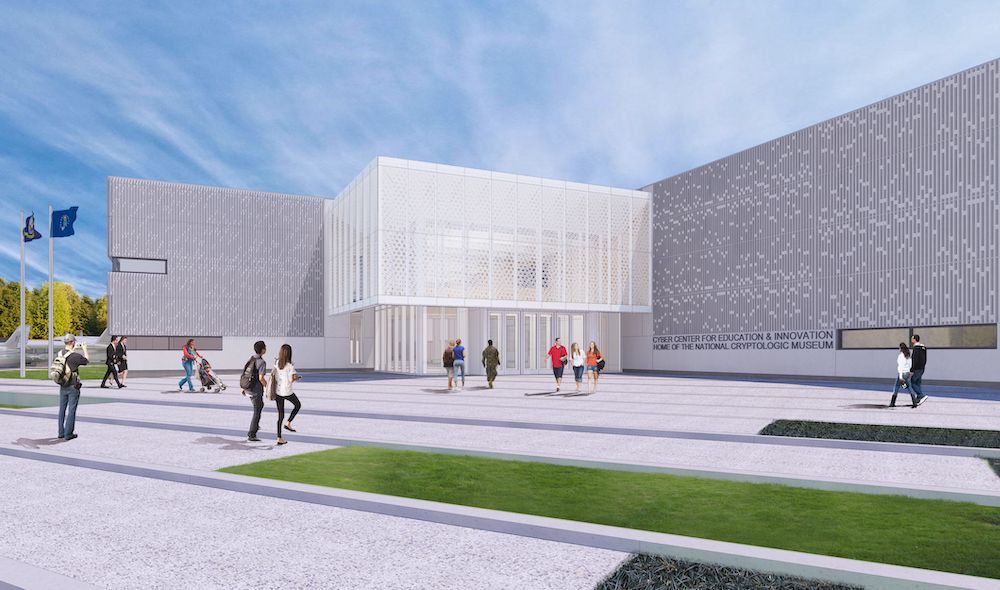 An artist's rendering of the proposed Cyber Center for Education and Innovation, which will be built on the campus of NSA-Washington at Fort Meade, Maryland. The 70,000-plus square foot complex will also serve as the new home of the National Cryptologic Museum.

When NSA and the National Cryptologic Museum Foundation (NCMF) break ground on the proposed Cyber Center for Education and Innovation (CCEI) on the campus of NSA-Washington (NSAW), it will culminate many years of hard work and commitment shared by the two partners.

The state-of-the-art CCEI will offer over 70,000 square-feet of conference space and classrooms, providing a venue focused on delivering programs that encourage government, industry, and academia to share insights, knowledge, and resources to strengthen cybersecurity across the Nation.

It will also serve as the new home of the National Cryptologic Museum. With a modern design featuring tall glass windows and skylights, a well-lit main room, and large open floor plans, the completely unclassified complex inspires transparency.

An artisti's rendering of the main hall inside the proposed Cyber Center for Education and Innovation. With a modern design featuring tall glass windows and skylights, the completely unclassified complex inspires transparency.

“This is an exciting time for NSA and the National Cryptologic Museum Foundation,” said Laura Nelson, President and Chief Executive Officer of the NCMF. “The vision for the CCEI was set forth by former NSA Director Lt Gen Ken Minihan, USAF (ret.), who continues to actively support our effort to build the CCEI. It is gratifying to see the work of so many come to fruition as we celebrate our history and the partnership between our organizations.”

The CCEI is the latest development in the 20-year partnership between the Agency and the NCMF. The robust collaboration is dedicated to the enrichment and enhancement of the National Cryptologic Museum, which has long served as an invaluable educational tool, cultivating the cryptologic professions and motivating future generations of mathematicians, engineers, computer scientists, linguists, and analysts.

The museum, founded in 1993, currently resides inside its original structure just outside NSAW’s secure fence line. It serves as the home of our Nation’s cryptologic treasures, and showcases the stories, people, and events that shaped cryptologic history.

“The Agency does some incredibly important work, but it can’t talk about what it does. It’s a cryptologic conundrum, I like to call it,” said Patrick Weadon, curator of the National Cryptologic Museum since 2005. “If you are a cryptologic organization in a democratic republic that answers to the taxpayers, there is one avenue to justify your existence, and that’s to take examples from the past of declassified stories, instances, and moments when cryptology played a critical role, and highlight them. People can extrapolate from those stories how important the present-day mission is.”

“If you’re going to try to give people an understanding of what NSA does, historical examples are one of the best ways to do it, and this museum does that fabulously,” Mr. Weadon added. “They do a really good job here.”

An artist's rendering of the entry lobby for the proposed Cyber Center for Education and Innovation.

In addition to hosting multiple stakeholders, NSA will be able to use the new complex to serve its industry and academic engagements and cybersecurity technical exchanges. The CCEI will also provide modern space that NSA can use for a plethora of unclassified events, including onboarding for new Agency hires, promotion and award ceremonies, as well as education and training.

“I think it’s the right time, right place, and it will create the right outcomes. For me, I find that extremely exciting. It’s extremely important,” said Toni Verstandig, who serves on the NCMF’s board of directors and oversees the foundation’s development committee.

The CCEI will serve as a critical part of the Agency’s public engagement.

“One way to increase public trust and confidence in NSA is to enhance our public and private partnerships in support of whole-of-nation cybersecurity efforts,” NSA’s Engagement & Policy Director Natalie Laing said. “The CCEI will be a key physical manifestation that enables NSA to notably grow and sustain public/private collaborations.”

The NCMF will build the CCEI and National Cryptologic Museum. It will then gift the complex to NSA and the U.S. Government. For details on NCMF’s efforts to build the CCEI, visit the foundation’s website.

“We’re really moving hard and fast to get that shovel in the ground, and it will be quite an extraordinary moment,” Ms. Verstandig said. “I look forward to sharing that with our colleagues at NSA and to have them stand side by side with us.”