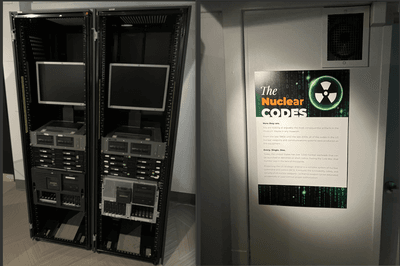 Have you visited the newly re-opened National Cryptologic Museum (NCM) and seen the National Cryptologic Foundation's new exhibit? The Foundation updated its exhibit, which now includes an iPad set up for visitors to easily search our In Memoriam Registry for departed colleagues, family members, and friends.

Over 700 people visited the Museum on its Grand Re-Opening Day. During the event, the NCF Escape Room was on display for visitors to search for clues, crack codes, and solve puzzles.

When you visit, be sure to check out the Museum's new exhibits, including the Nuclear Command and Control (NC2) (see photo) - only one of its kind - on display at the NCM. We hope you will be able to visit the Museum soon!

Keep an eye out for these upcoming Museum-related events in 2023: