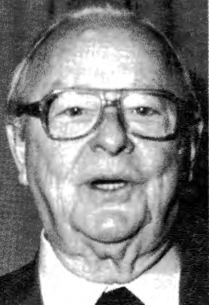 The information included below is from an 1988 NSA Newsletter regarding Mr. Adams receiving a Special Achievement Award.

"Deputy Director C. R. Lord presented Olin B. Adams with a Special Achievement Award -- certificate, plaque, and monetary award -- for his extraordinary contributions to NSA. Employed at the Agency for 25 years, Adams served in a number of senior managerial and technical positions, including a Senate appointment as a physical scientist. During his tenure, he received many awards for his expert skills and achievements.

He retired from NSA in 1971, but later returned as a re-employed annuitant to work on special projects. In 1985, the NSA Scientific Advisory Board identified him as an individual with the expertise necessary to solve a complicated analytical task. Adams returned to NSA to work on the problem without compensation.

His service has been very valuable; not only has he been instrumental in solving some very complex and difficult analytic problems, but he has also trained a cadre of people to carry on his work and has given them new insights into complex multi-discipline problems. The Deputy Director, senior Agency personnel, and co-workers have all praised Adams for his contributions."

Sponsored for the In Memoriam Registry by William G. Volenick.