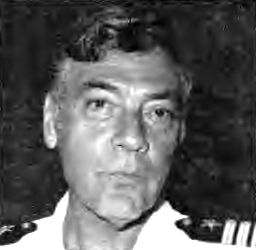 When the US Naval Security Group re-thinks its role and composition, note must be taken of the passing of a man who—for many of us— seemed to personify the best of the traditions and accomplishments, the professional, technical prowess that characterized the men and women of OP-20G and its successor, the Naval Security Group (NSG). That man was Norman Klar—Captain, USN (Ret.), “Norm” to associates and friends.

Born 29 March 1929 in Brooklyn, NY, he was graduated from Brooklyn Technical High School in 1947, from City College of New York (BS) in 1951, and received an MA from New York University in 1953. Commissioned through Officers’ Candidate School, Newport, RI, in 1954, he served first at Kodiak, received Chinese language training at Defense Language Institute (East), Anacostia, 1955-’56, and served at NAVCOMSTA, Kami Seya, Japan, 1956-’59. From 1959-1963 he served at NSA, where he impressed instructors, colleagues and others with what seemed to be an inherent ability in cryptanalysis. Foundation member (and sometime C/A instructor) Ray Schmidt (CAPT USNR Ret), a frequent contributor to the NCMF's "The Link," recalled that Norm was “one of a few natural cryptanalysts I had the pleasure of watching in action.”

Norm was rotated to a field assignment as Officer-in-Charge NAVSECGRU Activity, Taipei, from 1963-1965, a period in which his reminiscences have graced the pages of Cryptolog, our sister publication from the US Naval Cryptologic Veterans’ Association. From there he returned to NSA, serving 1965-’69. (At some stage in his NSA postings, he gained certification as Cryptanalyst in the rigorous professionalization program.) In 1969 he completed the five-month course at the Armed Forces Staff College, Norfolk, VA (now the Joint Forces Staff College, with multiple, but abbreviated courses). He served as NAVSECGRU Department Head at NAVCOMMSTA, Philippines 1969-1972, dual-hatted as Executive Officer 1971-72.

He returned to NSA for his final period on active duty, retiring in 1984, after some 31 years of service. His awards included the Legion of Merit (twice), the Defense Superior Service Medal, the Defense Meritorious Service Medal (1981), and the Navy Commendation Medal.

Legion of Merit Award (1972): Commander Norman Klar was presented by the Legion of Merit (Gold Star in lieu of receiving the award twice) by Vice Admiral Noel Gayler. The only man in the Naval Security Group to be awarded the citation twice, Cdr. Klar demonstrated "the highest degree of professionalism and technical expertise in managing a department assigned a wide variety of significant operational missions."

Defense Superior Service Medal (awarded in 1983):  Captain Normal Klar distinguished himself by exceptionally superior achievement as office chief and technical director for current analytical operations from December 1974 through December 1982. He was responsible for directing the efforts toward the production of military intelligence information which was highly significant and influenced decision making at the highest levels of goverment and military commands within the United States.

In “retirement,” CAPT Klar continued part-time at NSA as a senior (and highly regarded) cryptanalyst. Renee, Norm’s wife of 28 years and mother of their three children, died in 1978. Norm joined her on 25 March 2005, just short of his 76th birthday. To many of his colleagues, Norm Klar was “the last of the Old Breed.” This sketch of his career (that portion which is unclassified) recalls a leader and a “pro.”

Sponsored for the In Memoriam Registry by Harry G. Rosenbluh.