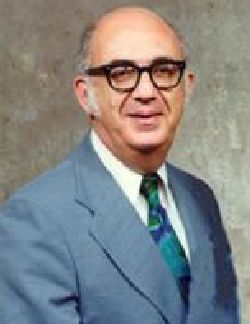 Jack Gurin was inducted in to the NSA Cryptologic Hall of Honor in 2007. The text below is from his Hall of Honor page on the NSA website. Mr. Gurin passed away in 2004.

Jacob "Jack" Gurin, a graduate of New York University, has been described as "… a moving force… always… where the action was." Jack (or Jake) was a man of myriad dimensions and talents - a published translator of Tolstoy, a World War II Army captain who served as a Japanese translator and interpreter, and a Russian language analyst and speech researcher who became NSA's Chief of Language Research. A visionary leader, Jack left NSA/CSS a rich and impressive legacy.

Gurin epitomized the 21st century term "change agent." It was he who formed the Plain Language Exploitation Group in 1947 after target changes led to a loss of exploitable encrypted intercept. Gurin expanded his group, sometimes in nontraditional ways: breaking precedent in a segregated organization, he systematically hired and trained African-Americans in cryptology.

Jack Gurin also led the way in what are now known as the Less-Commonly-Taught Languages. He predicted, correctly, that the liberation of nations from colonial empires would result in many targets shifting to languages NSA was unprepared to handle. He conceptualized and then implemented a program to produce reference and training materials in these languages. His foresight helped prepare NSA/CSS for the challenges it faces today.

Convinced that American cryptologists would eventually be swamped by voice communications, Gurin drove technology solutions that were unheard of in his time. Years ahead of the curve, he pushed to digitize dictionaries so that language analysts could quickly conduct research, and sought to create voice recognition systems. While his vision outpaced some of the technological solutions available at the time, every one of his ideas is a reality today.

Sponsored for the In Memoriam Registry by Milt Zaslow and Harry Rosenbluh.