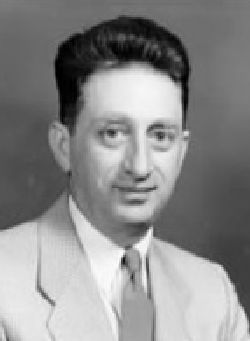 * Dr. Sydney Jaffe was inducted into the NSA Cryptologic Hall of Honor in 2001. The text below is from his Hall of Honor page on the NSA website. Dr. Jaffe passed away in May 1972.

For 31 years, Dr. Sydney Jaffe played a seminal role in building the institutional and intellectual foundations that have guided language work at NSA. His own career, both as a philologist-linguist and as a linguist-manager, served to inspire other linguists.

Jaffe earned an M.A. and Ph.D. in French at Harvard. He entered the Army cryptologic services in 1941, made the transition to civilian status at the end of World War II, and served with the Armed Forces Security Agency and NSA.

One of Jaffe's lasting legacies was his central role in advocating and establishing the NSA Professionalization Program. Recognized as the Agency's foremost linguist-manager, in 1965 he was appointed first Chairman of the Language Career Panel. The program established concepts, principles, processes, and standards for linguists that continue to guide today's intelligence environment. This program led to the development of the current government and national standards and calibrated metrics for language proficiency. These standards now underlie every language curriculum and testing program in the United States.

Jaffe's second legacy to the Agency language community was the founding of the Crypto-Linguistic Association (CLA) in the same year. This organization helped end the relative isolation of many groups of linguists, gave them a sense of profession, and provided a forum in which they could share problems and accomplishments.

To further meet the Agency's mission, he was asked to develop the first instructional modules on the uses of language and present them in senior management courses. His achievements were recognized in his selection as Deputy Director of Training. In his final Agency assignment, Jaffe became Chief of the Language and Linguistics Division.

In 1972, Jaffe received the NSA Exceptional Civilian Service Award. He died in May of the same year.

In recognition of his many contributions to the profession, in 1972 the CLA established the Sydney Jaffe Award, presented each year to an Agency civilian linguist whose accomplishments have contributed to the mission of the cryptologic community in the tradition of scholarship, leadership, and achievement exemplified by Jaffe's career.

Sponsored for the In Memoriam Registry by Annette K. Jaffe