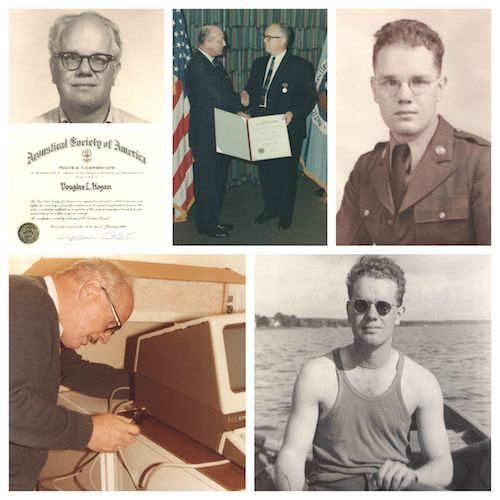 Douglas L. Hogan passed away on December 19, 1986 at the age of 62. Mr. Hogan was a retired electronics engineer formerly assigned to Research and Engineering.

Mr. Hogan was born to American parents in Tsinan, China on December 14, 1924. After the 1932 China and Japan military conflict in Shanghai, China, where his father was teaching for the Chinese government, his family returned to the United States in May 1932. His family came to the Washington area in 1936.

Starting in March 1943, Mr. Hogan served with the US Army during World War II. After basic and advanced training, he was assigned to the Advanced Army Specialized Training Program (studying engineering) at Penn State. In June 1944 he was assigned to 71st Infantry Division at Fort Benning, Georgia. After serving 15 months in Europe with the US Third Army, he was discharged in April 1946.

Mr. Hogan received a BS in Mathematics from the George Washington University in 1950. He received an MSEE from the Massachusetts Institute of Technology in 1954 and an additional Electrical Engineer degree from MIT in 1961.

Upon discharge from the Army, Mr. Hogan returned to work at the National Bureau of Standards. Beginning in February 1948, he started work as an electronics engineer with the Department of Defense. He served as a co-author for the 1971 National Academy of Sciences/National Research Council’s Report Research on Speaker Verification. Mr. Hogan was a 1968 recipient of the Exceptional Civilian Service Award. Mr. Hogan retired from NSA in 1976 after 28 years of Federal service.

Following his retirement, Mr. Hogan did consulting work in the fields of computer security, speech, and communications. He was the Study Director for the 1979 National Academy of Sciences/National Research Council’s Report On the Theory and Practice of Voice Identification. In 1983, he joined Sparta, Inc. as a Senior Scientist.

A member of Glenmont Methodist Church, he was survived by his wife, Patricia, daughter, two sons, brother, and five grandchildren.

Memorial Tribute of Douglas L. Hogan from the Acoustical Society of America

Douglas L. Hogan, a long-time member of the Society, died after a heart attack on 19 December 1986. He had been a senior scientist with Sparta, Inc. since 1983. He spent the major part of his technical career with the National Security Agency (NSA), retiring in 1976. In 1976-1977 he was a study director for the National Academy of Sciences/National Research Council.

Doug was born in China to American parents who came to the Washington, DC area in 1936. He served with the United States Army in Europe during World War II, then earned a bachelor's degree in mathematics at George Washington University and master's and EE degrees from MIT. His 1961 thesis, "Automatic Recognition of a Limited Set of Syllables," is an early example of speech research using digital techniques. In 1968 he received the Exceptional Civilian Service Award, the highest honor granted by the National Security Agency.

Doug Hogan's significant contributions to speech research and digital computation may be fully recognized by only a small coterie of workers at NSA because Doug was a quiet self-effacing man, the compete civil servant who underplayed his role in management and in R&D. In addition, he was a representative of an agency that not only did not seek public recognition, but for many years tried to avoid public scrutiny.

Doug instituted some early speech research programs at NSA and worked tirelessly to ensure cross-fertilization with speech research in industry and on the college campus. He employed individual industrial and academic researchers as consultants to NSA, and funded early work on word recognition/spotting, talker recognition, etc., at Haskins Laboratories, Purdue University, SCRI, UCLA, and other places. To support speech synthesis in research he provided Holmes-Mattingly formant synthesizers to a large number of academic and industrial speech laboratories.

The expertise developed within Doug's speech research laboratory enabled the Agency to evaluate research performed by its contractors and the speech community at large. Through his consultants Doug became acquainted with the major research centers, meeting active researchers and studying their work. His in-house research staff was responsible for important early work (mostly classified) on talker identification.

Within NSA Doug initiated and expanded policies that gradually led to the participation of NSA scientists at professional and scientific meetings. Doug, with the help of his colleagues, convinced his management that involvement with the Acoustical Society and similar groups is a legitimate part of the activities of a government scientist. He joined the Acoustical Society in 1961, was on the Technical Committee on Speech Communication from 1968 to 1974, serving as its chairman and on the Technical Council during 1971-73. He also served on CCEA from 1971 to 1978.

While on the Technical Committee on Speech Communication, Doug introduced the idea that the committee served academia, industry, and government equally, and that the committee membership should reflect those interests, a principle followed since. During his chairmanship the difficult and delicate issue arose of using so-called "voiceprints" as legal evidence, which Doug handled to the satisfaction of the Society and the speech community. Later he served as Executive Secretary to a NSA committee studying this forensic issue.

Doug's interests, capabilities, and efforts were equally effective in the field of digital processing. As a pioneer in the design and use of computers, he built in the early 1950's a relay computer to test algorithms. In 1951 he collaborated in the design of the ERA-1101. The company that built this computer for NSA became part of Sperry-Rand and eventually evolved into Control Data Corporation. Doug also built what was probably the first real-time input (Morse code) to a computer - a CDC-160. He may have been the first to put direct speech A/D conversion on a computer (BOGART). He was responsible, in part at least, for the application of computers to many practical problems of speech processing.

The accomplishments we are attributing to Doug Hogan might suggest a person with a driving ambition and forceful mien, but Doug was unassuming and nondirective to a fault. On only one topic was he didactic and quick to pass judgment - the quality of Chinese cuisine! The Acoustical Society and all persons involved in speech research and digital applications have lost a valuable and fine ally. We mourn our friend and colleague.

Sponsored for the In Memoriam Registry by Douglas Price.