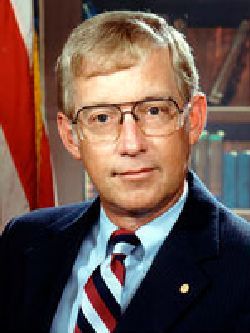 Charles Richard Lord, retired deputy director of the National Security Agency, died of a cerebral hemorrhage at the age of 61 on Feb. 8, 1993 at Johns Hopkins Hospital in Baltimore. He lived in Annapolis.

He retired in 1987 after 29 years with NSA and since then had been vice president for technology, planning and analysis of E Systems, a Dallas-based defense electronics company.

Mr. Lord was born in Omaha and raised in Grosse Pointe, Mich. He was a graduate of Denison University, the National War College and the Army Language School at Monterey, Calif. He received a master's degree in international relations from the University of Michigan. After service in the Army in Europe, Mr. Lord moved to the Washington area in 1958 and joined NSA as a cryptologist. He later served in Germany as NSA chief in Europe and as chief of staff and deputy director for operations. He was named deputy director in 1986.

Charles R. "Dick" Lord was inducted into the NSA Cryptologic Hall of Honor in 2015. The text below is from his Hall of Honor page on the NSA website.

During his exceptional career at the National Security Agency, Charles R. Lord distinguished himself by a rare combination of strategic and hands-on leadership. Mr. Lord provided guidance to NSA's Operations Directorate at the height of the Cold War, and at the same time, led development of a sophisticated strategy that served to position NSA/CSS for many of challenges in the 21st Century.

In his initial assignments at NSA in the 1960s, Mr. Lord earned a reputation as an area expert for a major intelligence target. In November 1969, he was appointed chief of A Group's Current SIGINT Operations Center, where he was responsible for assuring continuous collection and timely reporting on a key target.

Mr. Lord was responsible for significant structural improvements to NSA's mission. Under the direction of the Deputy Director of Operations, he led the task force that recommended establishment of a cryptologic operations center in the early 1970s. The organization and procedures of the Current SIGINT Operations Center served as the model for the National SIGINT Operations Center (NSOC); the structure Dick Lord recommended for NSOC is still in place.

In 1978, Mr. Lord was appointed as Chief, Headquarters National Security Agency/Central Security Service Europe. There, he was instrumental in redirecting and reorganizing operations to provide more effective and timely SIGINT support to both U.S. and NATO commands by initiating a series of programs to consolidate and integrate many diverse efforts within the European SIGINT community.

In 1982, Mr. Lord was promoted to Deputy Director for Operations. In this position and, subsequently, as NSA's Deputy Director, Dick Lord was instrumental in pushing technical capabilities in a world of changing technology, and strengthened foreign partnerships. These were important contributions to continued NSA successes in the late Cold War.

Charles R. Lord developed or improved much of NSA's operations during the Cold War, and helped shape the successful policies and practices that enabled cryptologic success in this crisis period.

Sponsored for the In Memoriam Registry by Jim Pasquarilli, and Kay and Bob Hunt.