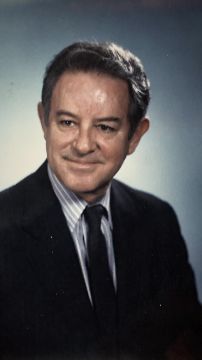 Benson K. Buffham, who served as the Deputy Director of the National Security Agency from 1974 until 1978, died on April 24th 2019 in Pompano Beach FL.

Mr. Buffham’s career spanned 38 years of government service beginning with the U.S. Army in 1942 when he was assigned to the Signals Intelligence Service and stationed at Arlington Hall, VA. He worked as a cryptanalyst on Japanese and German ciphers, including the German Enigma machine, whose solution greatly shortened the war in Europe. He ended WW II as a Captain on the staff of Col. Frank B. Rowlett, who is famous as the leader of the team of cryptanalysts who solved the main Japanese diplomatic cipher machine called Purple. Following the war, Captain Buffham accepted a civilian appointment with the Army Security Agency, and continued his work in Signals intelligence. When the Armed Services Security Agency was formed, he was transferred to that agency, where he remained until it was dissolved by President Truman in 1952 and replaced by the National Security Agency (NSA).

During his government career, Mr. Buffham held virtually all of the senior positions in the Directorate responsible for Operations. He served as Chief of the Office responsible for the Far East during the Korean War. He served also as Chief of Collection and Chief of the Soviet Bloc entity. When the Vietnamese war erupted, he was transferred from the Soviet Bloc problem to head up the Far Eastern entity of NSA where he served until becoming the Assistant Director for all SIGINT operations.

Mr. Buffham held two overseas assignments for the Agency. From 1958 to 1960 he was Chief of NSA Europe, stationed in Frankfurt, Germany. In 1980 he concluded his career as a special senior intelligence liaison officer with the US Embassy in London. Other NSA assignments included appointment as the first Inspector General of the Agency, NSA representative to the Office of the Secretary of Defense and the Joint Chiefs of Staff, and Assistant Director, NSA, for Resources Management, including the Office of the Comptroller and responsibility for the preparation of the NSA budget.

Mr. Buffham graduated with honors from Wesleyan University in 1941. He was a member and president of the Beta Theta Pi fraternity. He graduated from the National War College in 1956. His awards include the NSA Exceptional Service Award (1967), the Department of Defense Distinguished Civilian Service Award (1976), and the National Intelligence Distinguished Service Medal (1978). Additionally, in 1974 he received a special award from the Minister of National Defense, the Republic of Korea. In 2008 Mr. Buffham was further honored by being inducted into the NSA Hall of Honor.

Sponsored for the In Memoriam Registry by Joan & Bill Kvetkas and Kay & Bob Hunt.