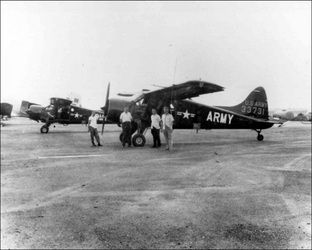 22 March 1962: ASA flew first airborne radio direction finding mission in Vietnam. It was a single-engine aircraft that flew low, slow, and had room for only a few people. This mission flew against Viet Cong transmitters east of Saigon.

Airborne DF had never been tried before. The challenges were many, from creating an airborne system that could discriminate between direct waves and sky waves to choosing the right kind of aircraft for the mission. However, by the spring of 1962, a year after their arrival in Vietnam, the 3d RRU was finally able to provide significantly better signals intelligence (SIGINT) support to the South Vietnamese Army with ASA's fledgling ARDF capability. The ARDF operator could get closer to the target transmitter without putting himself in imminent danger; one aircraft could move fast enough and cover enough area to eliminate the need for a network of DF teams; the response to the tactical commander's requirements was faster than with ground DF equipment; and most importantly, the ARDF was more accurate. It could precisely target the enemy's location, which led to follow-up by artillery, air strikes, and ground operations by South Vietnamese forces.