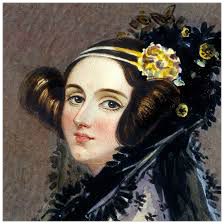 The daughter of famed poet Lord Byron, Ada Lovelace was a gifted mathematician and is credited with having written instructions for the first computer program. While translating an article for Charles Babbage about Babbage's engine, she added her own notes and ideas which ended up being much longer than the original article. In her article, she described how codes could be developed to handle letters and symbols, as well as numbers. She also theorized a method for the device to repeat a series of instructions, a process now known as looping. She contributed many forward-thinking concepts in her article and for her work is considered the first computer programmer.

Though her work was published, she only signed it with her initials and the article received little attention at the time. Her contributions to the field of computer science were not discovered until the 1950s. Since then, Ms. Lovelace has received many posthumous honors for her work. In 1980, the U.S. Department of Defense named a newly developed computer language "Ada," after Ms. Lovelace. Each year Ada Lovelace Day (see link below) is celebrated internationally on the second Tuesday in October to recognize the achievements of women in science, technology, engineering and maths (STEM).