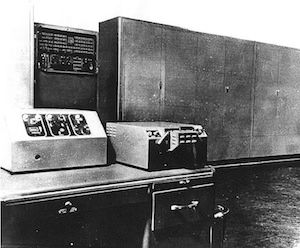 The excerpt below if from the Center for Cryptologic History's brochure titled, "Cryptology's Role in the Early Development of Computer Capabilities in the United States."

"By 1948 ERA (Engineering Research Associates) had received the go-ahead on task order 13, which required them to produce a full-scale digital computer for the Navy. It resulted in a computer called ATLAS, which was delivered to the Nebraska Avenue location and put into operation in 1950. ATLAS was a formidable machine that used 24-bit words and required over 2,500 vacuum tubes. Two ATLAS 1 and two ATLAS II systems (a more advanced 32-bit machine with two-address logic) were delivered between 1950 and 1954, and all were used on operational problems. As with COLOSSUS, these were not experiments, they were full-scale, reliable, operational machines that were used by cryptologists in their daily work. ERA also built other systems and subsystems for the cryptologic community. In particular, they were pioneers in the development and use of magnetic drum memories."