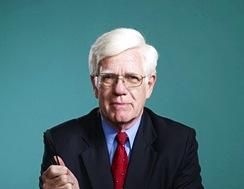 The 2016 Pearl Harbor Program and Luncheon took place on 5 December at the L3 Stratis Maryland Conference Center in Annapolis Junction, MD. See the gallery below for photos from the event.

The guest speaker was Dr. Linton Wells II, former Director of the Center for Technology and National Security Policy (CTNSP) at National Defense University (NDU), and the founder of the TIDES Project. He is also a Distinguished Research Professor at NDU. Learn more about Dr. Wells in his bio provided later on this page.

Dr. Wells provided this summary of his presentation for 5 December: "One of my recurring themes, which I owe to David Evans and Mark Peattie, is that the Imperial Japanese Navy was brilliantly prepared for battle, and not prepared for war. Things like intelligence, logistics, ASW, didn't fit well with either bushido or the concept of a single decisive battle, while the long term resource shortfalls (oil, etc.), inferiority in industrial production, and inadequate replacement training pipelines didn't fit with the scenario of even a relatively short war.

Click on any photo below for a larger view.

ABOUT OUR GUEST SPEAKER:

Dr. Linton Wells II is the former Director of the Center for Technology and National Security Policy (CTNSP) at National Defense University (NDU), and the founder of the TIDES Project. He is also a Distinguished Research Professor at NDU.

In twenty-six years of naval service, Dr. Wells served in a variety of surface ships, including command of a destroyer squadron and guided missile destroyer. In addition, he acquired a wide range of experience in operations analysis; Pacific, Indian Ocean and Middle East affairs; and C3I. Recently he has been focusing on STAR-TIDES, a research project focusing on affordable, sustainable support to stressed populations and public-private inter-operability.

Dr. Wells was born in Luanda, Angola, in 1946. He was graduated from the United States Naval Academy in 1967 and holds a Bachelor of Science degree in physics and oceanography. He attended graduate school at The Johns Hopkins University, receiving a Master of Science in Engineering degree in mathematical sciences and a PhD in international relations. He is also a 1983 graduate of the Japanese National Institute for Defense Studies in Tokyo, the first U.S. naval officer to attend there.

Dr. Wells has written widely on security studies in English and Japanese journals. He co-authored Japanese Cruisers of the Pacific War, which was published in 1997 and co-edited Crosscutting Issues in International Transformation, published in 2009.

His hobbies include history, the relationship between policy and technology, and scuba diving.