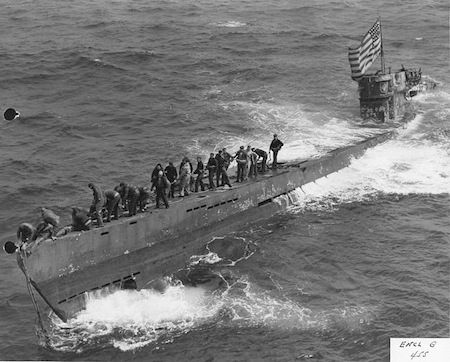 On 4 June 1944 a U-505 was captured by U.S. Navy Task Group 22.3, headed by USS Guadalcanal off the coast of Africa. The cryptographic materials found on board assisted Allied codebreaking operations.

From Wikipedia:
The U-505 is one of six U-boats captured by Allied forces during World War II, and was the first warship to be captured by U.S. forces on the high seas since the War of 1812. In 1954, U-505 was donated to the Museum of Science and Industry in Chicago, Illinois and is now a museum ship.

The cipher materials captured on U-505 included the special "coordinate" code, the regular and officer Enigma settings for June 1944, the current short weather codebook, the short signal codebook, and bigram tables due to come into effect in July and August respectively.

The material from U-505 arrived at the decryption establishment at Bletchley Park on 20 June 1944. While the Allies were able to break most Enigma settings by intense cryptanalysis (including heavy use of the electromechanical "bombes"), having the Enigma settings for the U-boats saved a lot of work and time, which could be applied to other keys. The settings break was only valid until the end of June and therefore had an extremely limited outcome on the eventual cracking of the Enigma code, but having the weather and short signal codebooks and bigram tables made the work easier.