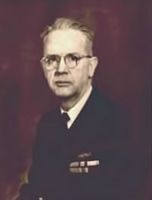 16 May 1973: CAPT Laurance Safford, USN, father of naval cryptology, died. Captain Safford established the Naval cryptologic organization after World War I, and headed the effort more or less constantly until shortly after the Japanese attack on Pearl Harbor. His identification with the Naval cryptologic effort was so close that he was often referred to as the Friedman of the Navy.