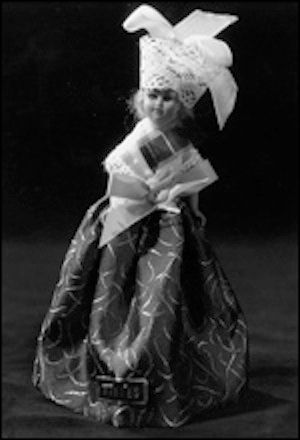 14 August 1944: Spy Velvalee Dickinson was sentenced to ten years for providing intelligence to Japan via "Doll Code" steganography in messages.

Velvalee used her doll shop as a front to send secret communiques - steganographic messages - around the globe, reporting on military activities and position. And example of an actual message: “Doll in a hula skirt is in the hospital and doctors are working around the clock”, which translated to “Light cruiser USS Honolulu is badly damaged and in Seattle undergoing around the clock repairs.”

The language of dolls apparently served up a myriad of ways certain activities could be discussed in front a casual observer without drawing too much attention. However, this was WWII. The government had a cadre of cryptanalysts on payroll examining the mail of everyday citizens and this is what led to Velvalee’s discovery.

She sent one her “letters” to Buenos Aires, but the intended recipient had moved on and the letter was returned to the US where it was intercepted by wartime censors. Thinking the correspondence was unusual, the censors passed it along to the FBI where it ended up in the capable hands of cryptanalyst Elizebeth Friedman, and the rest is history.