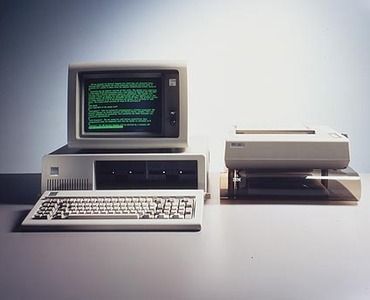 12 August 1981: IBM introduced the first IBM PC (IBM 5150) with a price tag of $1565. Two decades earlier, an IBM computer often cost as much as $9 million and required an air-conditioned quarter-acre of space and a staff of 60 people to keep it fully loaded with instructions. The new IBM PC could not only process information faster than those earlier machines but it could hook up to the home TV set, play games, process text and harbor more words than a fat cookbook.

Prior to its introduction, one IBM analyst was quoted as saying that "IBM bringing out a personal computer would be like teaching an elephant to tap dance." During a meeting with top executives in New York, lab director Bill Lowe claimed his group could develop a small, new computer within a year. The response: "You're on. Come back in two weeks with a proposal." Lowe's group of 12 strategists worked around the clock to hammer out a plan for hardware, software, manufacturing setup and sales strategy. They developed the proposal for the first IBM personal computer. It was so well-conceived that the basic strategy remained unaltered throughout the product cycle.

(Excerpts are from ibm.com history.)
Learn more about IBM's PC debut in the IBM Archives via the link below.