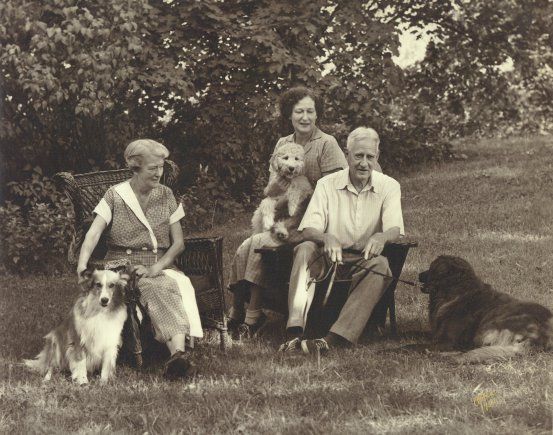 17 July 1911: Cryptologic pioneers Parker Hitt & Genevieve Young were married. In the photo are Parker and Genevieve Young Hitt with their daughter and their family dogs.

Colonel Parker Hitt's work, "The Manual for the Solution of Military Ciphers," published in 1916, was the first work of its kind in the United States in 100 years and laid the foundation for the nation's impressive cryptologic achievements during the 20th century. At a time when the nation had no formal cryptologic service, Parker Hitt's innovative work documented concepts and principles that would be used to protect U.S. military communications for decades. His work also directly influenced William and Elizebeth Friedman, who referred to him as the "father of modern American cryptology." He was inducted into the NSA/CSS Cryptologic Hall of Honor in 2011.

As a young Texas debutante, Ms. Hitt probably never suspected she would one day be described as "the U.S. Government's first female cryptologist." She likely developed an interest in cryptology alongside her husband, Colonel Parker Hitt. Ms. Hitt demonstrated a clear knack for cipher work and aside from a brief visit to Riverbank Laboratories, was self-taught. She initially deciphered messages without salary and in 1918 became a salaried Army employee, performing code work for $1,000 per year. She has also been credited with assisting in the preparation and compilation of her husband's seminal work, Manual for the Solution of Military Ciphers, published by the Army in 1916.