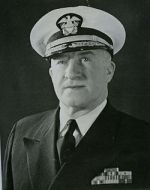 On 15 July 1949, RADM Earl E. Stone, USN, was named the first director of the AFSA. The mission of the AFSA was to try and coordinate SIGINT operations by the three armed services. AFSA was created in May 1949 and was the immediate predecessor of the National Security Agency. As the first director, Stone presided over the initial and stormy U.S. government attempts to centralize this country's cryptologic efforts.

Learn more about RADM Earl E. Stone, USN, via the link below.