1894: Brigadier John H. Tiltman, only foreign citizen in Cryptologic Hall of Honor was born in London. 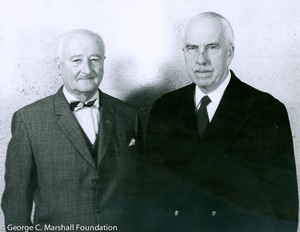 25 May 1894: Brigadier John H. Tiltman was born in London on this date. Tiltman is the only foreign-born citizen in the NSA/CSS Cryptologic Hall of Honor. (See link below.) Considered one of Bletchley Park's finest cryptanalysts on non-machine systems, Tiltman also had an important role in solving the German TUNNY machine system. He was an early and persistent advocate of British cooperation with the United States in cryptology. All totaled, he spent 60 years at the cutting edge of SIGINT. Learn more about him in the NSA Publication, "Brigadier John Tiltman: A Giant Among Cryptanalysts" via the link below. Photo is of William Friedman (left) with John Tiltman and is courtesy of the George C. Marshall Foundation.