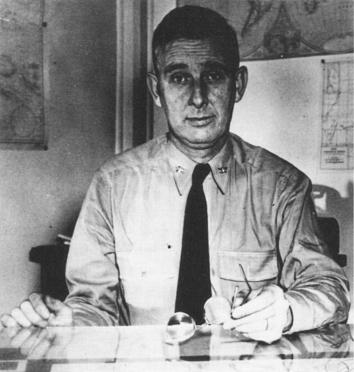 Port Moresby was an Australian base on the southern coast of New Guinea. US Navy communications intercept and radio direction finding station in Hawaii, codenamed "HYPO," warned that the Japanese were assembling a naval strike force at their major base at Rabaul on the island of New Britain, north of New Guinea. Decrypts of Japanese messages indicated the fleet would move on Port Moresby early on 7 May 1942.

American Admiral Chester W. Nimitz moved his forces to respond. A US Navy fleet with two carriers, the LEXINGTON and the YORKTOWN, steamed to the Coral Sea, between New Guinea and Australia, while combat aircraft were sent to Port Moresby to reinforce the base. The Japanese and American fleets struck at each other by air for two days in the Battle of the Coral Sea. Neither side's ships ever got within gun range of each other.

The LEXINGTON was sunk and the YORKTOWN was badly damaged. The Japanese light carrier SHOHO was sunk, and two larger Japanese carriers had to return to Japan for repairs. The battle was tactically a draw, but strategically an Allied victory because the Japanese drive on Port Moresby had been turned back. The Americans and Australians were able to ramp up their efforts to dislodge the Japanese from the northern regions of New Guinea.