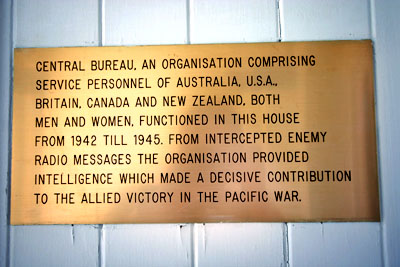 15 April 1942: Central Bureau was established in Australia to provide MacArthur's South West Pacific Theatre with COMINT. The Central Bureau was one of two Allied SIGINT organizations in the South West Pacific Area during World War II. The second unit was the joint RAN/USN Fleet Radio Unit, Melbourne (FRUMEL) Fleet Radio Unit Pacific, which was subordinate to the Commander of the USN 7th Fleet. Central Bureau's role was to research and decrypt intercepted land and air traffic and work in close co-operation with other SIGINT centers in the USA, United Kingdom, and India. Photo from Wikipedia.