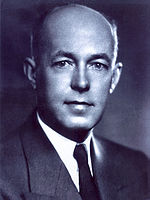 Herbert O. Yardley was commissioned a lieutenant in 1917, and tasked with setting up U.S. Army Code and Cipher Section, MI-8. The fledgling Cipher Bureau (The Black Chamber) had quite a few remarkable successes. Yardley eventually wrote a book about the Cipher Bureau, entitled "The American Black Chamber." The book was filled with good stories well told, as well as frank descriptions of Yardley's successes in cryptanalysis. It was a best-seller in 1932 -- overseas as well as domestically.

Yardley also wrote a book, "Japanese Diplomatic Secrets" in which he made heavy use of actual messages he'd intercepted from Japan. The book was seized by the U.S. government in 1933 for national security reasons.

Learn more via the links below and don't miss The Black Chamber display at the National Cryptologic Museum.