1882: Birth of Hermann Pokorny, founder of the Hungarian cryptanalytic service. 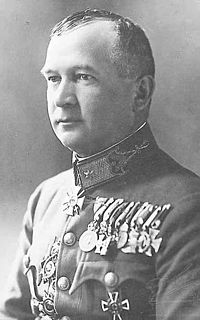 During World War I, Pokorny, as a cryptologist in the rank of major, headed the Austro-Hungarian General Staff's Russian-Cipher Bureau. He showed great ability in decrypting Russian enciphered military messages that were broadcast by radio in 1914–17. He recognized that the Russian cryptographers had reduced the 35-letter Russian alphabet to 24 letters, while doubling the 11 missing letters to some of the other 24 letters. His break into the Russian military cipher system enabled Austro-Hungarian and German forces to act in advance of impending Russian maneuvers, thus contributing substantially to Central Powers victories over the Russians. He is mentioned in Soviet Marshal Boris Shaposhnikov's famous book, Мозг армии (The Brain of the Army, 1929). For his services to cryptology, Pokorny was decorated with the Large Military Merit Medal with Swords in 1918. Founded on April 1, 1916, this honour was intended for the "highest especially praiseworthy recognition" and was awarded only 30 times. 28 of its recipients were officers of general's rank; the other two were the naval aviator Gottfried von Banfield (1916) and Pokorny himself. By 1918, when the Austro-Hungarian Empire fell, he was a lieutenant colonel.