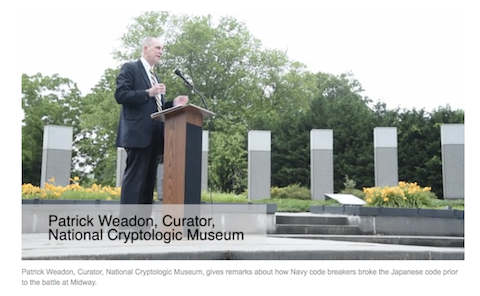 NCM Curator Patrick Weadon speaks at the 2016 Battle of Midway ceremony in Annapolis.

The Navy Information Operations Command, MD, based at Fort Meade, held a ceremony at the Maryland World War II Memorial in Annapolis to commemorate the 74th anniversary of the Battle of Midway.

The battle is considered the turning point in the war in the Pacific as the U.S. achieved its first major victory just six months after Japan’s devastating surprise attack at Pearl Harbor, which pulled the nation into World War II. American cryptanalysts partially broke the Japanese code, allowing them to intercept messages outlining plans for an assault on Midway Island, about 1,000 miles northwest of Honolulu.

Instead of crushing the American fleet as it rushed to the defense of Midway, the Imperial Japanese Navy was ambushed by American forces, sinking four of the six aircraft carriers that had been involved in the Pearl Harbor attack.The U.S. lost 300 men in the battle, compared to more than 3,000 Japanese sailors and airmen. The U.S. lost one of its carriers, the U.S.S. Yorktown, and turned the tide of the war in the Pacific.