Book Recommendation: A Covert Action: Reagan, the CIA, and the Cold War Struggle in Poland - by Seth Jones 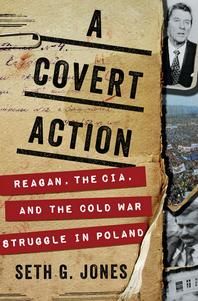 We are very happy to announce that political scientist and author, Mr. Seth Jones, will be the guest speaker at our Summer Cryptologic Program on 17 June 2020 (date subject to change due to COVID-19 restrictions). For anyone unfamiliar with his books, below is a short summary about his most recent book,  A Covert Action: Reagan, the CIA, and the Cold War Struggle in Poland. Make sure to join us for the program to hear Seth's presentation. Additional books authored by Jones are: Waging Insurgent Warfare; Hunting in the Shadows: The Pursuit of al QA'ida after 9/11; and In the Graveyard of Empires: America's War in Afghanistan.

Seth Jones’ new book, A Covert Action: Reagan, the CIA, and the Cold War Struggle in Poland, details the dramatic untold story of one of the CIA’s most successful intelligence operations during the Cold War, which has important implications for today’s threat from Russia. In 1982, while Soviet-backed Polish prime minister Wojciech Jaruzelski worked to crush a budding opposition movement through martial law, the CIA launched a sophisticated intelligence campaign supporting dissident groups—particularly the budding political force Solidarity in Poland. With President Ronald Reagan’s support, the U.S. helped fund underground newspapers, support radio programs, and conduct a proactive information campaign. This covert action program, code-named QRHELPFUL, was vital in establishing a free and democratic Poland and undermining the KGB’s global information campaign.