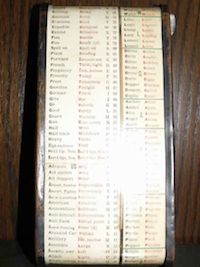 The artifact pictured here is believed to be a WW II era Slidex code device. A Slidex is a manual encoding system used mainly for tactical communications to provide a short-term level of security when non-secure communication links are being used. They use a word or sometimes phrase substitution based upon a prearranged set of codewords or codephrases. The device pictured here came from the Lou Kruh collection donated to the NCM in April 2010. It is about 8 inches long by 4 inches wide. A wheel on the side rotates (i.e., "slides") the list of codewords forward or backward to encrypt usually short stereotyped messages. We are looking for information from Web site visitors who may know who, how, when, and where this device was used by cryptographers and/or radio operators.

The Slidex with which I'm familiar was a WW2 British tactical cryptosystem for tactical operations, regiment and below, combining the features of cipher and code, with the code vocabulary peculiar to intended service (staff, signals, supply, transportation, etc.). Probably from their Free French association with the Allies in WW2, the French in Indochina passed the system to their allies there in the 1950s, and it was known to the opposition. In the form with which I was acquainted, see http://www.duke.edu/web/isis/gessler/collections/crypto-disk-strip-ciphers.htm.

What you have pictured from Lou's collection appears to be more along the lines of a "handy-dandy" for radio/telephone operations than what I understand as the SLIDEX system per se. There is a website for WW II reenactors from Wireless Group Set19 that seems to have some restricted distribution stuff available on limited basis to its membership, but other SLIDEX references can be found using a Google search.

I can tell you this, from what I've read each day had a 'code' setting which was different for each division, and everyone (at least, most officers and signals personnel) in the division knew on each day what the settings would be for that day, and presumably for the next couple days. My guess is that these devices generally accompanied signals personnel and would have been fairly common in headquarters and observation posts.

So far, I've only seen one 'primary source' discussion of how this was used, and it comes from the 1st Division AAR for August 9th, 1944 (see photo of AAR below).  A single American platoon at St. Loup (northeast of Mayenne) came under heavy attack and was forced to retreat. Apparently, the Slidex device was left behind and captured. Therefore, the division abandoned the Slidex settings for August 9th and 10th, and shortly before midnight all the subordinate formations were ordered to use the August 11th setting for the remainder of August 9th and August 11th.

So I think you will agree that at least this single source suggests two things: one, the Slidex was a tactical device likely to be seen at the tactical level, and two, its settings were generally determined by the division on a daily rotation.