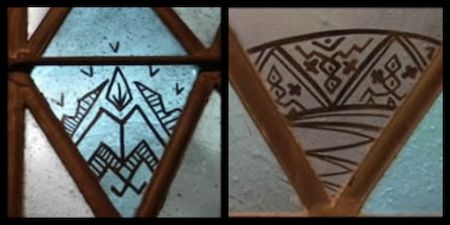 The symbols such as the ones shown here and provided below are some of those that are on the stained glass windows of the Memorial Chapel located on the grounds of Lake Junaluska in the western mountains of North Carolina.

Lake Junaluska is a Conference and Retreat Center owned by the Southeast Jurisdiction of the United Methodist Church. Memorial Chapel was conceived by Dr. Elmer Clark and Bishop Harrell as a fitting Memorial to the men and women of the Southeast Jurisdiction who served in the military during World War II. It is a memorial to those living, as well as those that lost their life, in defending out way of life.

The Chapel was constructed in the late 1940s and the windows in the Main Chapel were dedicated on July 22, 1950. The Room of Memory was dedicated in July 1954 and the style of the symbols is markedly different in those windows than they are in the Main Chapel. The Room of Memory is connected to  the Chapel by a covered breezeway and contains a large notebook with the names of over 90,000 veterans from the Southeast Jurisdiction.

All the windows were built by a company in Chicago, Ill., Giannini and Hilgart (spelling questionable). At the time the windows for the Chapel were built, the company had hired a number of immigrants from the Ukraine and Poland. One of those was Lubomyr Wandzura who worked as a Glass Painter for the company. He later purchased the company.

His family noted that every window made was placed in a stand in the front of the shop where the early morning sun would light its panes and parts.  There, the balance of the various panels and colors of glass would be checked to see if they were acceptable. They also remarked that none of them ever saw symbols such as those below in any other windows that were made by the company. They even contacted a retired stained glass artist from the shop and asked her about such symbols. She had never seen anything like them.

In correspondence with a stained glass artist, none have seen such symbols. They are quick to point out that artists use "doodles" to balance the light of the various panes but had not been able to provide a real example as to when that was used. These windows are unique and were built by persons who knew the windows were going to be installed in a Memorial Chapel. The symbols are far too complex to be artist "doodles" and had a special meaning to those that put them there.

We owe the remaining WWII veterans an explanation of the symbols and their meaning and we hope someone out there will have some answers. It is the least we can do for the greatest generation.

For more information about the Lake Junaluska Conference and Retreat Center and to see more images of the stained glass windows visit John Hoopers blog on the Memorial Chapel.

I am by no means an expert on any of this but I would like to suggest that these symbols may come from the Ukrainian Pysanka tradition. I was not able to find any example of these on stain glass windows but they are very common on, for example, Ukrainian Easter eggs. Similar traditions exist among other Eastern European countries. I noted that a number of the workmen involved in the project came from these countries. The meanings of the sysmbols appear to be quite ancient but there are adaptations to Christian beliefs. Certainly many churches engage in the tradition. One thing that may throw people off track a little is that Pysanka is often, but not always, very colorful which in this case probably would have disturbed the balance in the windows.

I have enclosed a number of Pysanka pictures which show symbols identical, or nearly identical, to many of the symbols and patterns on the windows. It also seems possible that the very window design itself divided into the many triangles, wedges and diamonds may come from this tradition. I enclose a link to an interesting Wikipedia article. Note the discussion of 40-48 triangles and wedges. Some images from the Wikipedia article are provided below. 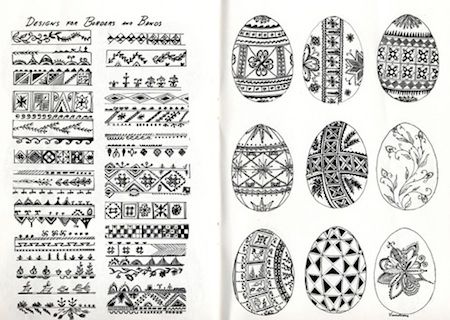 In the picture Pysanky Spirals and Plants (far left in the row of pictures) you can see a good example of the brown spiral design against black background, on the brown/white/black egg that matches the spiral on the window pretty well. This design is said to represent protection against the evil spirit. The next egg has a plant design with inwardly curling stalks which matches one of the plants on the windows pretty well (window with red cross). Plants appear to be for good harvests or represent the natural environment. There are a variety of other plant designs on the windows, water designs (said to be for rain and good harvest) that can be found on the pictures and many more can be studied on the internet.

Another picture shows an example of the "crossed clubs" design, and in some of the other pictures you also see good similarities with the window designs of crosses, so called "eternity bands" for an eternal life etc.

All of this is of course very much the theories of a non-expert and should be verified with a Ukrainian/Pysanky specialist, but it appears to me that the window artists sent a final greeting from the very depth of their homeland traditions and endeavored to provide a place full of natural goodness and spiritual protection. That seems entirely in keeping with the place. 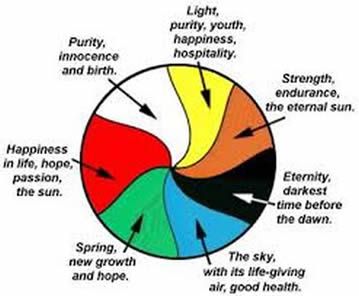 In his recent email, Kent provided side-by-side comparisons of Junaluska Chapel Window symbols matched to Ukrainian Pysanky and related symbols.  You can get his complete submission as a PDF by clicking on a Grouped Comparison.