Dr. David Kahn has made another significant donation of cryptology related items to the National Cryptologic Museum. The AC Chairman traveled to New York in early March to pick up 5 boxes of books, journals, research notes and personal correspondence and memorabilia. The donation included 37 English-language and 18 foreign-language books on codes and ciphers spanning nearly five centuries of cryptologic history.

One of the “novel” items in this donation was a publisher’s picture puzzle of the front-cover of Dr. Kahn’s preeminent work, The Codebreakers. This was the 13th donation from Dr. Kahn over the past ten years. A photo of the partial stack of donated items is included here. 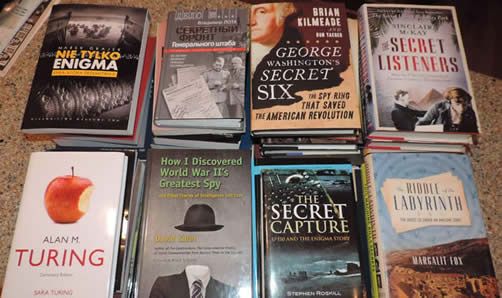