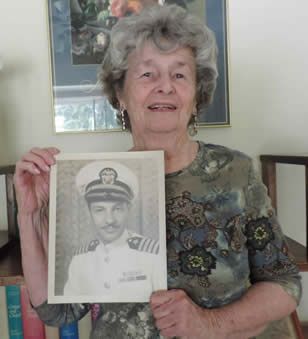 While in southern Virginia the NCMF's Acquisitions Committee chairman picked up a collection of WW II era photographs that belonged to Navy Captain Jack Holtwick. The photos were offered to the NCM by Captain Holtwick’s daughter, Patricia Holtwick Moran. The collection included both official and personal photographs taken at various periods during Captain Holtwick’s distinguished career. Pictured here is a photo of Patricia Moran holding a copy of her father’s official Navy photograph.

Captain Holtwick is a significant intelligence personality from WW II and is referenced in at least six books relating to code breaking and intelligence, especially the role of Station Hypo in the decisive Battle of Midway. He served on the code breaking and traffic analysis team of Navy Commander Joe Rochefort at station Hypo, Fleet Radio Pacific, Pearl Harbor before, during, and for some period after the attack on Pearl Harbor.

In 1943 he was transferred to Naval Communications Headquarters in Washington D.C. where he reported to Rear Admiral Joe Redman. It was during this assignment that he learned that Admiral Redman and his brother, Navy officer John Redman, were claiming that OP-20-G in Washington vice Station Hypo at Pearl was responsible for the outstanding intelligence support that led to America’s decisive naval victory at Midway.

Captain Holtwick was later instrumental in revealing the truth about the Redman brothers' campaign of disinformation, and about where the credit was truly deserved. An anonymous monograph headlined: “The Inside Story of Midway and the Ousting of Commander Rochefort,” detailed the conspiracy of the Redman Brothers in perpetrating this intelligence lie.

For more information on this please refer to the excellent book, And I Was There, written by Rear Admiral Edwin T. Layton, USN (retired).