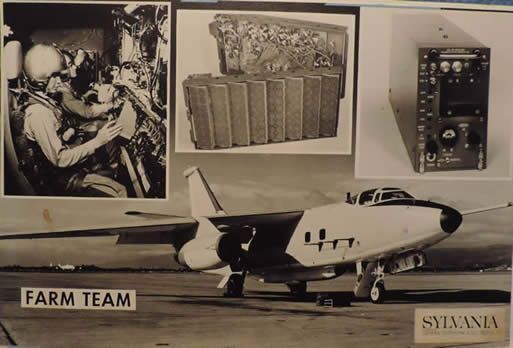 Two large unique mounted photos of the EA-3B Skywarrior were recently donated by Foundation supporter Dennis Lewandowski who served as a mission specialist on the EA-3B in Turkey in the early 1960s. The electronics package on the EA-3B “FARM TEAM” intelligence gathering aircraft was designed by Sylvania Electronics Defense Lab. The Skywarrior was one of the longest-serving aircraft in history, seeing service in five decades from the 1950s through the early 1990s. It was also the heaviest operational aircraft to ever operate off of a carrier. There was also an Air Force variant of the EA-3B (the B-66 Destroyer).

An EA-3B is on display in National Vigilance Park dedicated to the memory of all U.S. Naval aircrews who perished while conducting secret reconnaissance missions around the world. One of the donated FARM TEAM photos is included here.