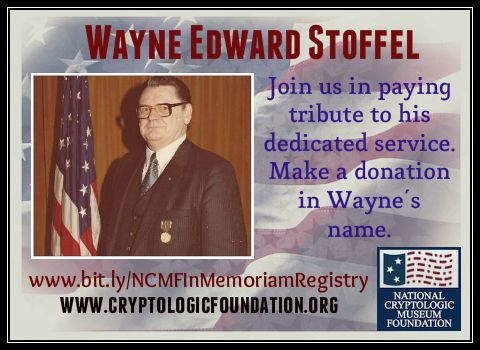 Wayne was an Army veteran who proudly served his country. Following the Army, he worked for the National Security Agency for 40 years. He was one of the founders of the modern discipline of TA, and the value it has had in producing intelligence information is in large part due to his vision and his efforts.

He served as Clerk of Session for the Evangelical Presbyterian Church, Annapolis MD, and as Registrar of the Institute of Biblical Studies, Annapolis MD. He was later Station Manager of WOTL, Toledo OH, and volunteered in various roles for Wycliffe Bible Translators. Wayne was an alumnus of Johns Hopkins University.

A memorial service for Wayne Stoffel is scheduled for Sunday December 13th at 3PM at Eagle Heights Presbyterian Church, 403 S Loudoun Street, Winchester VA 22601. The family requests that donations may be made in his honor to the National Cryptologic Museum Foundation (cryptologicfoundation.org) and The Gideons International (gideons.org). Expressions of sympathy may be sent to:  110 Shumard Court, Stephens City, VA 22655

*** Wayne Stoffel will be buried at Arlington National Cemetery on 30 March 2016 at 1 pm. Please see more details via our event calendar. ***