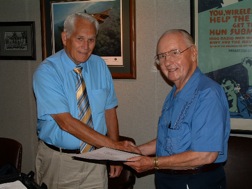 Navy Captain Laurance Safford is often referred to as the “father of U.S. naval cryptology.” His contributions during WW II were numerous and significant. Through the quick thinking and generosity of Mr. Robert Frey the Foundation received two file boxes of personal papers and documents that belonged to Capt. Safford. Mr. Frey acquired the documents from the Riggs Bank while doing research on the last flight of Amelia Earhart. Capt. Safford had written an unpublished manuscript on Earhart’s last flight. The manuscript was part of his estate and Riggs Bank was the executor (Capt. Safford apparently had no remaining heirs at the time of his death). Mr. Frey literally rescued the documents from a trash barrel at the Rigg’s storage facility where for some unexplained reason they were about to be trashed.

The donated papers included a number of personal letters written by Capt. Safford regarding events surrounding the congressional investigation into the attack on Pearl Harbor. One letter refers specifically to the “Winds Message” reportedly intercepted by the U.S. days before the 7 December surprise attack. This infamous message reportedly gave clear indications of the planned Japanese surprise attack. Unfortunately the actual intercept mysteriously disappeared shortly after the surprise attack and the Winds Message very existence is only supported by the testimony of Safford and perhaps one or two others who reportedly also were aware of the intercept.

The papers also included a four page letter from Capt. Safford to Vice Admiral C.E. Rosendahl responding to two pages of questions from Rosendahl about the number, distribution, disposition and construction of PURPLE machines prior to the attack on Pearl Harbor. Other documents included a petition to the Congress and supporting testimony to award Capt. Safford remuneration for his many secret cryptologic inventions, some of which were cited as among the most important and secure communication systems used by the U.S. during WW II. There were also numerous documents related to the life and subsequent disappearance of Amelia Earhart with whom Capt. Safford apparently maintained a fascination with up to the time of his death.