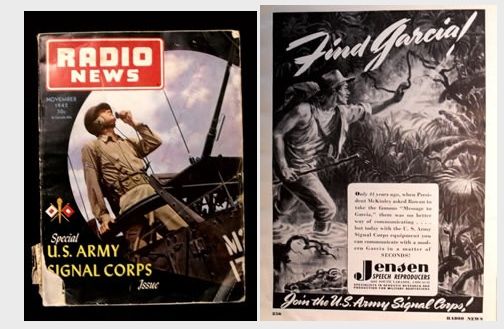 The AC acquired a 1942 edition of Radio News Magazine from a New Jersey antique dealer. After a request from the AC Chairman the dealer donated the magazine to the Foundation. Most of the 280+ page magazine is devoted to the history of the U.S. Army Signal Corps. Radio News started publication in 1919, changed names a number of times over the years, and is known today as Popular Electronics.

The November 1942 issue is full of Signal Corps stories and photos (color and black and white), and also has a number of great WW II-era radio-related ads. One of the most intriguing is a “Find Garcia” recruiting ad for the U.S. Army Signal Corps sponsored by Jensen Speech Reproducers. The “Garcia” in the ad is Garcia Calixto who led the insurrection against Spanish rule in Cuba. After the sinking of the USS Maine in Havana harbor, President McKinley composed a message of support to Garcia who was hiding somewhere in the Cuban mountains. Facing war with Spain, President McKinley wanted to know the disposition of Spanish forces in Cuba and the status of allied insurgent forces. He was told that U.S. Army Leftenant Andrew Rowan could be relied upon to deliver the message. Lt. Rowan took the letter and accepted the assignment with a “consider-it-done” attitude. He asked no questions, landed in Cuba at night and somehow, on foot in hostile and unfamiliar territory, found Garcia and completed the mission in three weeks. Lt. Rowan is often referred to as the real hero of the Cuban War.

The subsequent story of “A Message To Garcia” has been translated into almost every major language and has become one of the most published stories in the history of printed word with over 100 million copies in print. It is widely used in both theological teaching (will you carry a message for God without question?), and in recruiting (we’re looking for a few good men who can work independently and be relied upon to complete a task without asking 100 questions!). Who could have know that a simple ad and recruiting poster for the U.S. Army Signal Corps would have such profound meaning and worldwide impact. The Radio News cover and the ad are pictured here.