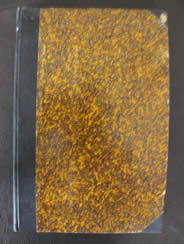 In May 2013, the NCMF completed the purchase of a very rare 1863 German language book on cryptology from a private European seller for $750. The book, “Die Geheimschriften und die Dechiffrierkunst” ("Secret Writing and the Art of Deciphering") was written by Major Friedrich Wilhelm Kasiski, a German infantry officer and cryptographer.

The book is in excellent condition for its age and is bound together with a second book not related to cryptography. Kasiski's book is believed to be the first published account of a procedure for attacking polyalphabetic substitution ciphers, especially the Vigenère cipher. The significance of Kasiski's cryptanalytic work was not widely realized at the time. Cryptologic historian Dr. David Kahn notes, "Kasiski died on May 22, 1881, almost certainly without realizing that he had wrought a revolution in cryptology" (The Codebreakers). 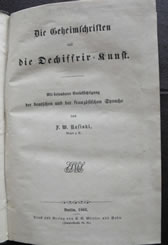 There are only a few known copies of this book in museums and 3 or 4 in the hands of private collectors. In one of his writings Dr. Kahn indicated that Kasiski's book had eluded him and it was still a book he coveted. Considering the book collection that Dr. Kahn donated to the National Cryptologic Museum had some of the rarest cryptology books in the world, this is fairly high praise for the Kasiski book. According to his memoirs in The Story of Magic, when Frank Rowlett reported to work as the first junior cryptanalyst in the Signal Service at Large on April 1, 1930, William Friedman told him that the best books on cryptography and cryptanalysis were not in English. Because he knew Rowlett had studied German he gave him a copy of the Kasiski book because it contained “some good explanations of a variety of cipher systems” and left him to begin his study. A week later Rowlett was joined by Solomon Kullback and Abraham Sinkov, and the training of Friedman’s first junior cryptanalysts began in earnest.