Alan Turing to be honored on UK's 50 Pound Note 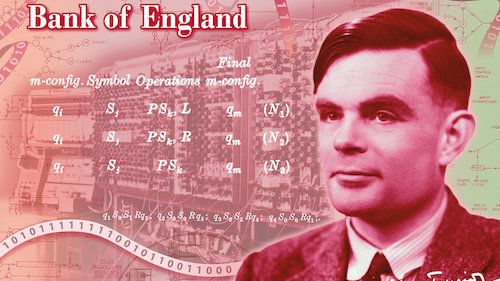 By the end of 2021, people will begin to see mathematician Alan Turing featured on the Bank of England's newest 50 pound note (see photo). The Bank of England's new 50-pound note will honor the code-breaker who helped lay the foundation for computer science. The bill will include a quote from Turing: "This is only a foretaste of what is to come and only the shadow of what is going to be."

When unveiling the note, the Bank of England's governor, Mark Carney, said "Alan Turing was an outstanding mathematician whose work has had an enormous impact on how we live today. Alan Turing's contributions were far-ranging and path-breaking. Turing is a giant on whose shoulders so many now stand."

Learn more via the NPR article "Alan Turing, Computing Genius And WWII Hero, To Be On U.K.'s New 50-Pound Note" by Bill Chappell.