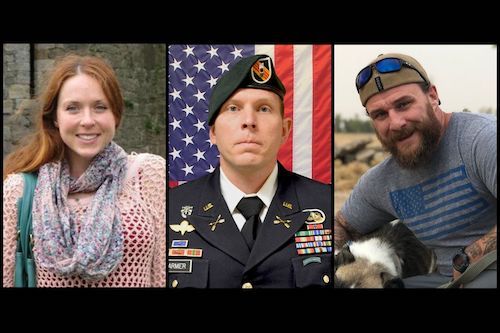 On Wednesday, 16 January 2019, an ISIS-claimed bombing in Syria claimed the lives of Americans, including Navy Chief Cryptologic Technician (Interpretive) Shannon M. Kent, 35, of Pine Plains, N.Y. Her family and friends described her as a "rambo on the outside" and said there was pretty much nothing she could not handle. Kent is believed to be the first female U.S. servicemember killed in action since December 2015, and first killed in action in the anti-ISIS campaign.

Below is a portion of the Stars and Stripes article about the Americans killed during the ISIS-claimed bombing in Syria.

Click HERE to view the article online via Stripes.com

WASHINGTON — The ISIS-claimed bombing of a restaurant in Syria on Wednesday killed an Army Green Beret with four children, a former Navy SEAL working for the Pentagon’s intelligence agency and a Navy linguist, the Pentagon announced Friday.

Shannon Kent: ‘Rambo on the outside’

There was pretty much nothing Navy Chief Petty Officer Shannon M. Kent couldn’t handle, her friends and family said.

Kent outsmarted many of those around her, knew more than a half-dozen languages, was a wife and mother to two young boys, a cancer survivor, a world traveler deployed multiple times for the military, lobbied on Capitol Hill for new protections for servicemembers and was slated to start a graduate program this year.

That drive for Kent ended Wednesday at the age of 35.

“She was so loving and such a worldly person, the smartest person I knew, Rambo on the outside but a girly girl at heart. She was such a badass woman,” her sister-in-law Kay Kent said Friday. “It’s so tragic she is gone. It is the nightmare phone call you worry about receiving but I never thought I would get.”

The attack on Wednesday brings the number of American servicemembers killed in action in the anti-ISIS fight in Iraq and Syria to 16. Wirtz is the first known Defense Department civilian killed in what has been called Operation Inherent Resolve since 2014.

The servicemembers were at a restaurant near a crowded market for a meeting with local leaders, U.S. Central Command said after the attack. Members of the Manbij Military Council, which has controlled the city since it was liberated from ISIS in mid-2016, were also reportedly among the roughly 16 people killed in the blast.

The attack appears to be the work of ISIS, a defense official said Friday. That official stressed that the investigation into the attack was ongoing and the Pentagon had yet to reach a final conclusion on the party responsible. President Donald Trump last month declared ISIS defeated in Syria and announced he would withdraw all American forces from the country in the near future. The Pentagon has begun withdrawing equipment from Syria, but roughly 2,000 troops remain on the ground there, officials have said.

Vice President Mike Pence said Thursday at the Pentagon that the attack would not change the administration’s determination to leave Syria.

“We will honor the memory of the fallen,” he said. “And their families and our armed forces should know their sacrifice will only steel our resolve that as we begin to bring our troops home, we will do so in a way that ensures that the remnants of ISIS will never be able to reestablish their evil and murderous caliphate.”

Kent signed up for the military shortly after high school and her husband was also in the military, Kay Kent said.

“They’ve been through so much in the last 10, 15 years in the military, you think you paid your dues and buried your friends and you make it,” she said. “But that’s so false. Slowly but surely people got word where they ate lunch and then horrible people make decisions.”

“When you are highly ranked as a Navy linguist officer, you put a stereotype on somebody, but she was such a warm mother and funny and caring and charismatic,” Kay Kent said. “I got to know her more …I didn’t understand how she could be in the Navy and be so sweet and kind and beautiful. That has changed that stereotype for me. You can be a multidimensional woman and be whatever you want to be.”

Kent, who grew up in a service-oriented family, loved horses and learned Spanish so she could communicate with workers at the stables, Kay Kent recalled. In high school, Kent was suddenly interested in French and started learning it within a few short months. At a wedding they attended together once, Kay saw Shannon speaking to a woman in a language that she had never heard before.

After so many years of serving in the military, Kent said her family fell into a false sense of security that Shannon Kent and her husband had already been through so much, that they were safe. After all, Shannon Kent was due to start a stringent graduate program this year, she said.

Shannon Kent had just deployed to Syria in late 2018. Following Trump’s announcement that troops would be withdrawn, the Kent family assumed Shannon would get moved to a new post in the Middle East.

“To make it this far, we are so shocked that this could happen,” Kay Kent said.

On Facebook, as news of Kent’s death spread Thursday, Navy chiefs within the small but secretive cryptologic intelligence community changed their profile photos to a Navy insignia with a black band. Many of them expressed their disbelief at Kent’s death, saying she had more combat experience than most in the Navy.

Cassandra Nolan, who described Kent as one of her best friends, said she was “an indescribably amazing person” and leaves behind two sons under the age of 5.

“I love you Shannon,” Nolan wrote. “You made the world a better place and you deserved the world in return. I’m heartbroken.”

Click to read more of the article and to learn about Army Chief Warrant Officer 2 Jonathan Farmer, and Navy SEAL Scott Wirtz.