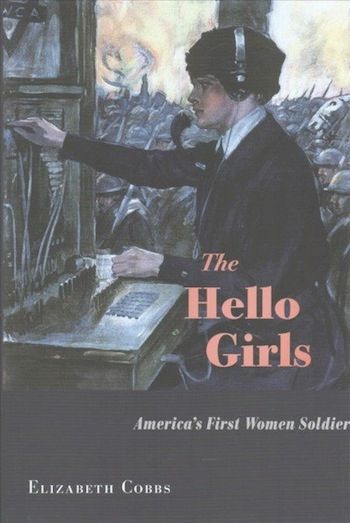 'The Hello Girls' Chronicles The Women Who Fought For America — And For Recognition
An NPR Book Review by Glen Weldon on 6 April 2017
Click HERE to view this book review on the NPR website.

"During World War I, some 223 members of the U.S. Army Signal Corps performed a highly specialized service which demanded great skill, nerve and tenacity: Over the vast network of telephone lines that had been hastily constructed across France, these soldiers worked the complicated switchboards connecting the ever-shifting front lines with vital supply depots and military command. At the height of the fighting, they connected over 150,000 calls per day.

They had been specifically recruited for this task. They underwent physical training, they received medical examinations and inoculations, they swore the Army oath, they wore regulation uniforms and "identity discs" (akin to dogtags) to identify their remains. They observed strict military protocol, they were subject to court-martial, and many found themselves stationed a few short miles from the front during the bloodiest days of that very bloody war, at outposts that came under sustained mortar fire. General "Black Jack" Pershing, who had issued the call that caused so many of them to volunteer, singled them out for praise.

They were brave. They were resourceful. But when they returned home, they discovered to their dismay that, according to the United States government at least, there was one thing they most certainly were not: veterans.

They were the "Hello Girls" — a cadre of patriotic women who volunteered when the U.S. Army realized that the war would be won or lost on the Allies' ability to exploit the new technology of telephone communication. In the crisply written The Hello Girls: America's First Women Soldiers, Elizabeth Cobbs details exactly what was asked of these women during the war, and reveals, with an authoritative, dispassionate, this-was-some-self-evident-nonsense lucidity, the dismaying extent to which their country failed them when it was over.

Because they were women, the Department of War denied them veteran status — including benefits, medical care, commendations, honorable discharges, military funerals, even the right to wear their uniforms. For 60 years they fought to be recognized for their service. Although this struggle is relegated to The Hello Girls' final chapter, the blunt matter-of-factness that marks Cobbs' prose quietly slam-dunks her thesis: 'Stubborn pride, bureaucratic arrogance, and the belief that women simply did not merit recompense blinded senior staff officers to faceless female veterans.'

The Hello Girls is built around the diaries of several young women who served as operators; we come to know Berthe Hunt, Grace Banker, Merle Egan and others as they trace the arc familiar to every young soldier: raring to get as close to the fighting as possible, pining for home, and gradually growing all-too-intimate with the horrors of war. (Cobbs outlines the tactics of several WWI battles and offensives in which the Hello Girls played key roles with an unhurried precision that will keep even the least military-minded reader's eyes from glazing over.)

Cobbs is particularly good at spotlighting how closely the service of military women like The Hello Girls was tied to the success of the suffrage movement ...

Smartly, she also walks us through the sundry and simultaneous technical demands of switchboard operating, noting that women could connect five calls in the time it took a man to complete one.

Cobbs is particularly good at spotlighting how closely the service of military women like the Hello Girls was tied to the success of the suffrage movement — specifically, how their example steadily wore down fervently held beliefs about the status of women, and changed that national mood. She painstakingly charts the steady shift in the attitudes of President Woodrow Wilson and his cabinet towards the women's vote, with an eye for the perfect, lacerating detail.

Here she is, for example, on Secretary of War Nelson Baker: "... a small man, not much above five feet, the bespectacled secretary often sat with one leg bent under him to give an impression of greater height when receiving visitors at his giant desk in the War Department." Yee-ouch.

The Hello Girls is clear-eyed about the root cause of the Army's disingenuous confusion over these women's status: the document signed by General "Black Jack" Pershing that called them into being. "Every word of Pershing's order implied military service without stating it."

That imprecision proved something the U.S. government would successfully cower behind until 1977, when President Jimmy Carter signed the order granting the few surviving Hello Girls full veterans status. It's an abiding irony of American military history that one poorly communicated order kept the very soldiers tasked with communicating orders from receiving, for six long decades, the recognition they deserved."

Return to our HOME PAGE
Click to read an article via the NSA website titled Women Telephone Operators in World War I France."
Visit the Cryptologic Bytes Archives via the "Return to List" link below.