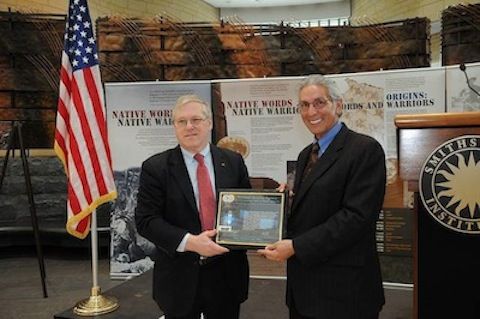 After some research, NSA found that place to be the National Museum of the American Indian (NMAI) in Washington, D.C. By direction of Congress, the NMAI maintains the names of all Native American Code Talkers and has two exhibits dedicated to the Code Talkers. When the NSA staff asked the NMAI if their director would be willing to accept and display the plaque in their museum, the answer was an enthusiastic “Yes.”

The ceremony took place in the Potomac Atrium of the NMAI (located at 4th and Independence, in Washington, DC) on April 8, 2014 at 11 a.m. The Native American Code Talkers HoH Family Plaque was unveiled and presented by NSA Deputy Chief of Staff Trumbull D. Soule to the NMAI Director, Mr.Kevin Gover (Pawnee).

Following remarks, there was a small, private reception following the ceremony. Some Native American customs were integrated into the ceremony. To see an album of the photos from the event, click HERE.