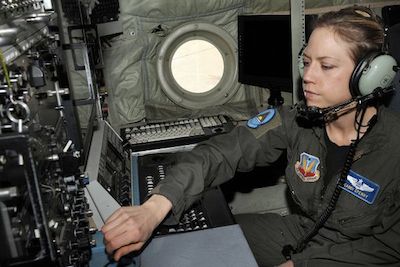 From the above-noted site:

The Compass Call was delivered to the Air Force in 1982, and had its first flight in 1981. The aircraft has demonstrated a powerful effect on enemy command and control networks in multiple military operations including Kosovo, Haiti, Panama, Iraq, Serbia and Afghanistan.

Join us for a #CyberChat - including one this morning, 4/20 at 11am with Dr. Mark Asselin, Deputy Commandant of the… https://t.co/XuBjAHWy5f
NCMF

Making plans for the kids for #EarthDay2021 - @ignotofsky - author of #WomenInScience has some excellent coloring… https://t.co/c08H4S2zW8
NCMF

The NCF directly supports the National Cryptologic Museum (NCM), the first public museum in the U.S. Intelligence Community. We think you will agree it is truly a "museum like no other."

Located adjacent to the National Security Agency (NSA) in Maryland, the NCM houses a priceless collection of artifacts that represent our Nation's history in code making and code breaking, as well as a world class library of cryptologic media. The NCF acquires the best artifacts for the NCM and supports new educational and interactive exhibits.

Further, the NCF's Vision is to Influence the cryptologic future by sharing our educational resources, stimulating new knowledge, and commemorating our heritage.

The NCF and NCM share a joint three-fold mission to Educate, Stimulate, and Commemorate. Learn more about our MISSION.