1930: Solomon Kullback Reported to SIS to work for William Friedman. 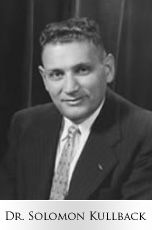 22 April 1930: Solomon Kullback reported to SIS to work for William Friedman. He was inducted into the Cryptologic Hall of Honor in 1999 - see the excerpt below and learn more via the link at the end of the page.