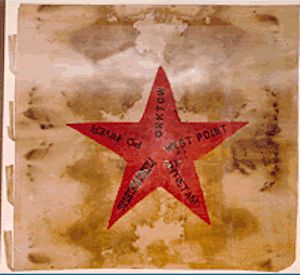 19 April 1862: Confederate Signal Corps was established. Learn about the National Cryptologic Museum's updated Revolutionary Secrets exhibit via the link below.

Flag signals were also easily intercepted by the enemy. The trick was to encrypt the messages so that they would make sense only to the intended receiver. To send messages, signal officers placed themselves in high elevations where friendly and enemy troops could easily see them. This made signal officers easy targets for enemy sharpshooters.

Soon after the war began, the "Battle Honors" flag, such as the one displayed at the NCM's updated Civil War Exhibit, was designed and awarded only to signal officers for bravery in combat. The points of the star denoted important battles in which the officers distinguished themselves. The flag displayed at the NCM's newly updated Civil War exhibit is only one of two known to exist today in which all five points have been adorned with battle names. The exhibit also displays messages between commanders warning each other of intercepted messages, one of the last existing Union code books, and a replica of a Confederate cipher wheel.

The first use of wigwag during battle was by the Confederates at the Battle of First Manassas (or First Bull Run for the Union.) Captain Edward Porter Alexander, who worked with Myer in developing the system, caught the glint of bayonets from his viewpoint atop a hill and immediately wigwagged the message "Look out for your left; you are turned." It played an important role in the Confederate's victory.

This star flag, displayed in the Museum, is a rare item. In order to enhance morale, a signal flag was modified by placing a star in the center. This special flag was awarded only to Signal Corps officers who distinguished themselves in combat. The points of the star could be used to denote important battles in which the unit had distinguished itself. This flag is only one of two known to exist today in which all five points have been adorned with battles.